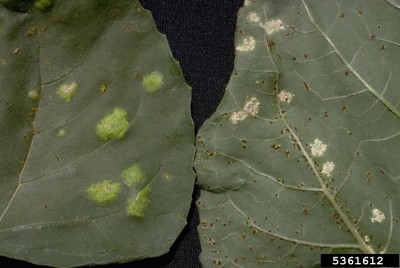 Also called Staghead or white blister, white rust disease affects cruciferous plants. These plants are all members of the cabbage family (Brassicaceae) and include such vegetables as broccoli, cauliflower, Brussels sprouts and kale and can ruin your crop.

What is white rust? It's a disease that causes distinctive chalky white spore masses sometimes referred to as pustules that first show up on the underside of leaves. These blister-like masses, called sori, form under the leaf's dermis (skin) and can't be scraped off without damaging the leaf. The stem and leaves can become twisted and deformed. White rust disease can and will infect the floral parts as well. Broccoli and cauliflower, in particular, will produce grossly deformed heads and for those gardeners who collect seed for the following year's planting, those seeds will be sterile.

White rust is one of several species of the fungus Albugo. It commonly occurs when nights are cool and damp and days are warm. The perfect time for growing cruciferous vegetables also provides the perfect growing conditions for Albugo. Controlling white rust fungus would be easy if we could control those spring and fall temperatures since it flourishes between 57°F. and 68°F. (14° to 20°C.). Unfortunately, we can't control temperature any more than we can control the spring rains or the dewy mornings this fungus adores.

If your garden has been plagued by white rust disease in the past, you should look for resistant strains in the future. There are no fungicides specific to white rust treatment and once the disease becomes rampant, there is little to be done. That being said, fungicides used to treat downy mildew are sometimes effective against white rust, particularly the more leafy crops. Treatment must begin at the first signs of infection. The methods for controlling white rust fungus or how to prevent white rust are largely organic.

The control of white rust fungus depends on the understanding of the life cycle of fungi in general. Fungi reproduce by producing spores, tiny microscopic cells, each of which is capable of becoming a fungi and thus establishing a new colony — what we see on the leaf or stem. Because of their minuscule size, these spores are carried easily from plant to plant, or garden to garden, by wind or water. Because of a protective coating, many of these spores can lay dormant for long periods of time, surviving in both cold and arid conditions. When conditions are right again, they ‘blossom.'

The secret to how to prevent white rust is two-fold. First is the removal of the places where the spores hide. Garden debris should never be left to overwinter. Even plant growth that looks healthy may be harboring spores waiting to spread the disease the following spring. Obviously infected debris should be disposed of away from the garden area. As it is almost impossible to collect and destroy every scrap of debris, consider tilling it under as another form of white rust treatment. While tilling won't destroy the spores, it can prevent them from being exposed to the growing conditions they require.

The second step in controlling white rust fungus is crop rotation. Infected beds should not be replanted with cruciferous vegetables for at least three years.

Remember, good garden housekeeping is essential in controlling white rust fungus as well as many other garden diseases; therefore, it should be a regular part of your gardening calendar. That old adage remains true: An ounce of prevention is worth a pound of cure.

How to Recognize Plant Stress

What Is Cenangium Canker: Managing Sooty Bark Canker On Trees

Blossom-End Rot: How to Identify, Control, and Prevent Diseases

How to Recognize Plant Stress

What Is Cenangium Canker: Managing Sooty Bark Canker On Trees

Blossom-End Rot: How to Identify, Control, and Prevent Diseases