Side Effects of Dong Quai

2016/8/8 18:08:08
Breast cancer, increased sensitivity to light, miscarriage, and gynecomastia are some of the common side effects of Dong quai (angelica sinensis). This Buzzle article briefly describes these along with some other possible side effects. 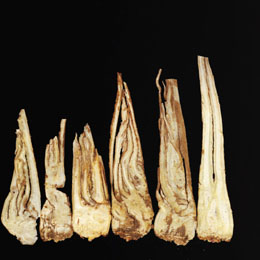 Dong quai is a perennial plant that belongs to the celery family, with a scientific name Angelica sinensis. It grows at high altitudes in the mountains of the cold and damp regions of China, Japan, and Korea. In the Chinese language, 'Dong quai' means to 'return to order'. In Traditional Chinese Medicine, it is believed to best suit individuals with yin or low-energy profile, because of its mildly warming effects. The roots contain compounds that dilate blood vessels, reduce pain, and stimulate and relax muscles of the uterus.

It is also known to treat arthritis and spleen disorders. However, improper usage and dosage may result in certain negative effects on the health of the user. Though not many, yet they exist.

Side Effects
Breast Cancer OnsetDong quai contains phytoestrogens that compensate for the deficiency of the female sex hormone 'estrogen' in a woman's body. This enables it to temporarily treat various disorders of the female reproductive system. These are menstrual cramps, menstrual pain (dysmenorrhea), menstrual irregularity, premenstrual syndrome, and menopause symptoms. However, many research scientists believe that phytoestrogens may trigger the cancerous growth of breast tissue.
Increase in PhotosensitivityHigher doses or long-term use of this medicine causes inflammation and skin rashes. This is because it works to increase the photosensitivity of the skin. Moreover, during angelica extract usage, people generally complain of increased sensitivity to light. Therefore, in order to keep such effects at bay, you should always apply sunscreen lotion before going out in the sun or minimize sun exposure as much as possible.
MiscarriageThe use of Dong quai is prohibited for pregnant women. The reason lies in its hormonal and anticoagulant properties. It may disturb the normal balance of the hormones, which further may result in abortion or miscarriage. It is also not recommended to those women who experience extensive menstrual flow.
Excessive Blood ThinningDong quai roots contain coumarin derivatives that have a blood thinning property. This makes angelica extract unsuitable for consumption by people who are on any kind of anticoagulant prescription. Its over usage can cause excessive thinning of the blood, which will result in another line of medical complications, like bleeding.
GynecomastiaIt contains phytoestrogen that has weak estrogen-like properties. Estrogen is a female sex hormone, but is also found in the male body. The level of estrogen is always lower than that of the male sex hormones in men. Over consumption of this drug disturbs the balance of male and female hormones in men. Higher concentration of estrogen causes enlargement of breasts in men. This condition is medically termed as gynecomastia.
Drug InteractionDong quai supposedly interacts with a number of drugs and causes negative effects. Some of the drugs with which it has been reported to have produced side effects on interaction, are Warfarin, Aspirin, and non-steroidal anti-inflammatory drugs (NSAIDs) like Ibuprofen. Some other drugs known to interact with it are ardeparin, dalteparin, danaparoid, heparin, and other antioxidants and health supplements.
Other Side EffectsDong quai herb has been observed to elevate the blood sugar levels. This way, it can worsen the condition of diabetic patients. Secondly, higher doses cause negative effects on the blood pressure, circulatory system, and respiratory systems. Thirdly, it is a laxative, and hence, incorrect doses may trigger the onset of diarrhea and other abdominal disorders.
In order to derive numerous benefits without affecting your health, you should never indulge in self-medication. It needs to be taken only when actually required and in recommended quantities. The best person to seek advise would be a qualified medical professional. Therefore, always consult the concerned professional before taking any step further.

Disclaimer: This Buzzle article is for informative purposes only. Please seek medical help in case of serious illness.

Crops That Grows Best In Your Hydroponic - Indoor Vegetable Garden

The Roots Of Your Garden Are In The Soil

Crops That Grows Best In Your Hydroponic - Indoor Vegetable Garden

The Roots Of Your Garden Are In The Soil