How to Prune and When to Prune Hydrangeas 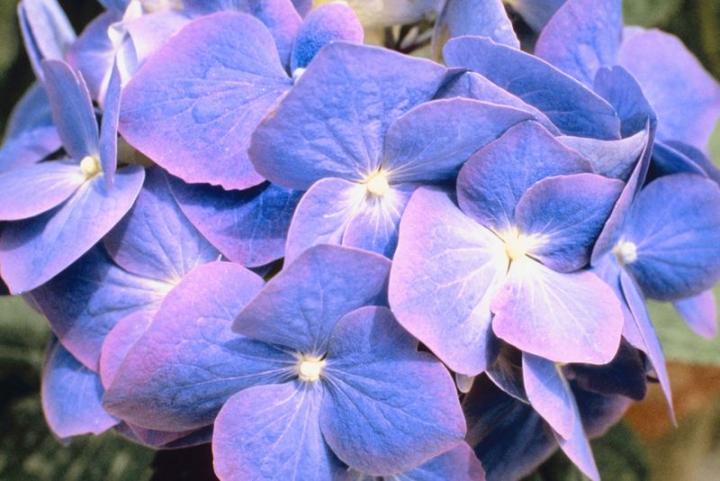 Hydrangeas can sometimes be a tricky plant to care for, so it is important to learn how to prune them and when to prune them. Properly pruning hydrangeas based on your hydrangea variety will allow you to have more blooms next year.

Before you start pruning hydrangeas, it’s important to know which variety you have. If you prune at the wrong time, you could be cutting off next year’s blooms.

Pruning Hydrangeas Based on Variety

The extreme weather we had last winter did a number on my hydrangeas. Even though my area is hardy to zone 5, my ‘Endless Summer’ mophead hydrangea—which usually has huge blue blossoms all summer long—was killed to the ground. Luckily, it has the wonderful ability to bloom on both old and new wood so even though they may be late in coming we still should get some blossoms. 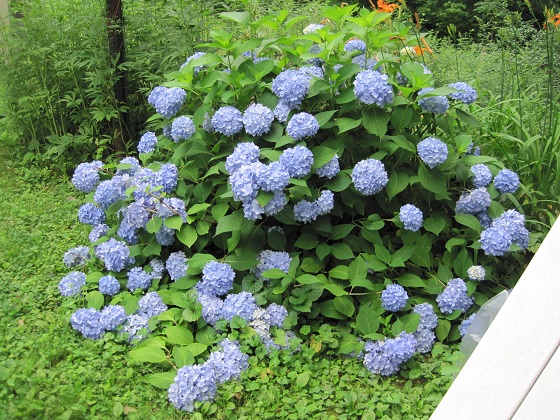 ‘Endless Summer’ in a good year.

My other blue hydrangea is a lacecap-type called ‘Let’s Dance Starlight,’ but instead of the huge mophead-type of flower cluster that ‘Endless Summer’ has, it bears a flat blossom made up of many small fertile flowers surrounded by a few showy sterile flowers. It is also hardy to zone 5 and has the ability to bloom on both old and new wood. 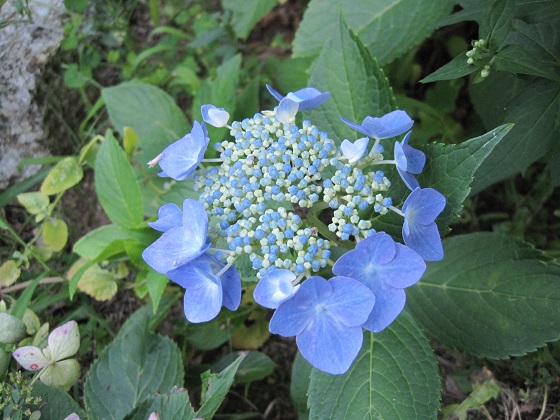 These are both considered bigleaf or macrophylla hydrangeas, so they can be pruned right after flowering by cutting back the flowering shoots to the next bud. If you have older plants that aren’t blooming well, you can cut up to a third of the stems off at the base in late summer to encourage new growth.

The hydrangeas grown most often in New England gardens are the panicle-types since they are not only beautiful but also very hardy, surviving zone 3 winters with no problems. One of the oldest and most reliable favorites is ‘Grandiflora,’ also known as Pee Gee hydrangea. Native to China and Japan, it was the first Asian hydrangea cultivar introduced to the United States in 1862. They were a big hit during the Victorian era. The flowers start out a creamy white and turn a rosy pink as they age. They can be dried and look lovely in a winter arrangement. Find out how to dry these lovely hydrangeas here.

There are many panicle-types to choose from. I have one called ‘Pinky Winky’ that has long cone-shaped white and pink flowers, and also ‘Vanilla Strawberry,’ which has panicles that color from white at the tip to pink in the middle and red at the base. For something different, try ‘Limelight,’ which has chartreuse flowers that gradually turn pink in autumn. Panicle-type hydrangeas should be pruned in late winter to keep them from becoming overgrown. 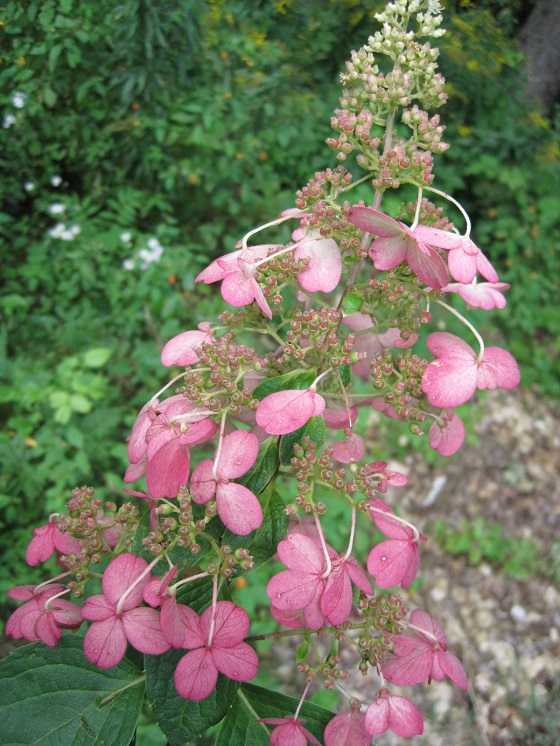 Smooth hydrangeas are North American natives, originally found growing wild in Pennsylvania. They tolerate light shade, begin to bloom in June and continue to blossom until fall. Their white flowers are round and can reach 12 inches in diameter. 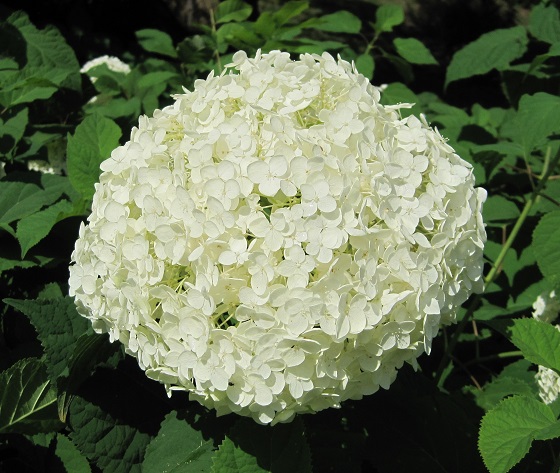 The popular cultivar ‘Annabelle’ grows to be 3-5 feet tall and can be used to light up a shady path or as a mass planting at the edge of the woods. It is hardy to zone 3. Smooth hydrangeas can be pruned back to the ground in the fall or early spring.

Oak-leaf hydrangeas are another North American native, having been discovered in Georgia in 1773. 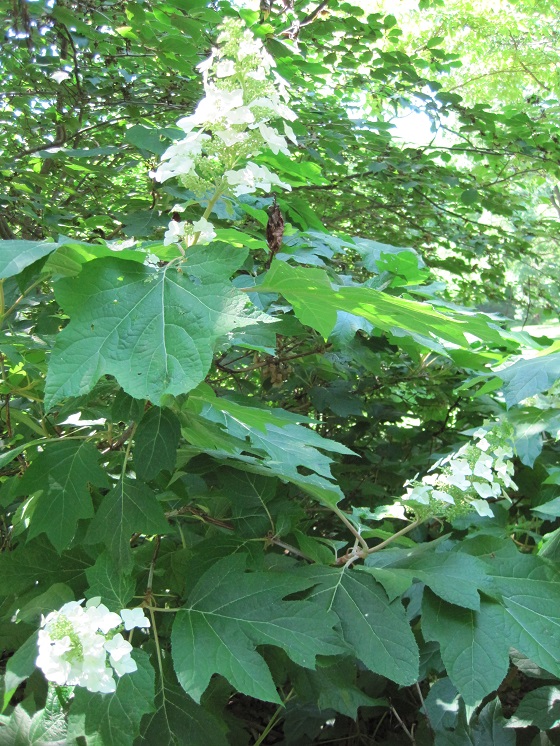 Also called swamp snowball, it is hardy to zone 5 and though it prefers full sun, it can take some shade and still blossom well. It blooms a little later than the other hydrangeas, beginning in August. Its flowers are large panicles that start out white and turn dark pink as they age. The leaves, which are deeply lobed like an oak leaf, turn a rich maroon red in the fall. Oak-leaf hydrangeas don’t need a lot of pruning but if you want to tidy yours up, prune out the dead stems at the base in early spring.

If you are unsure what type of hydrangea you have, a general rule of thumb is to prune them right after flowering. Check our Winter Pruning Guide for other tips on how to prune all your shrubs, including hydrangeas.

Get inspired by Robin Sweetser's backyard gardening tips. Robin has been a contributor to The Old Farmer's Almanac and the All-Seasons Garden Guide for many years. She and her partner Tom have a small greenhouse business and also sell plants, cut flowers, and vegetables at their local Farmer's Market.

Where to Get Bonsai Tree Care Instructions

Garage Doors; Up & Over We Go!

Got Frost-Damaged Plants? How It Happens, and When and How to Prune

Where to Get Bonsai Tree Care Instructions

Garage Doors; Up & Over We Go!

Got Frost-Damaged Plants? How It Happens, and When and How to Prune