Composting Potato Haulms: Can You Add Potato Tops To Compost 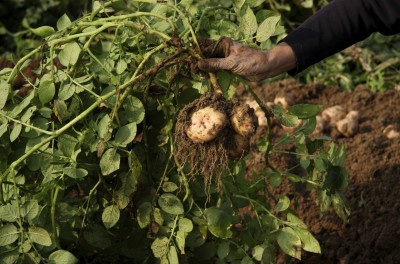 When this title came across my desktop from my editor, I had to wonder if she misspelled something. The word “haulms” had me flummoxed. It turns out that “haulms' are simply the tops, stems and foliage of the potato plant, and this term is commonly used amongst our friends across the pond in the UK. At any rate, the question is whether composting potato haulms is okay and, if so, how to compost potato plant haulms. Let's find out more.

Can You Add Potato Tops to Compost?

There seems to be some debate about the safety of composting potato haulms. Of course, potato haulms in compost will decompose just as any other organic matter.

Potatoes, tomatoes and peppers are all members of the Solanaceae or Nightshade family and, as such, contain alkaloids that can be toxic. The conundrum is if composting potato haulms will render the resulting compost toxic in some way. This does not seem to be an issue, however, as the composting process will make the alkaloids inactive.

Another reason for questioning the veracity of potato haulms in compost is due to the possibility of transferring disease. Growing potato haulms are commonly afflicted with blight, so composting them may harbor disease or fungal spores which are not broken down during the composting cycle. If you know that you will not be using the resulting compost with any Solanacea crops, this is probably okay, but not all of us can plan exactly where our compost will end up. There is then a risk of transmitting disease to the successive year's plantings.

Lastly, there are often tiny tubers left on the plant that, when composted, thrive in the warm, nutrient rich pile. Some folks like these volunteers, while others feel they may foster disease.

In summary as to, “Can you add potato tops to compost?” Yes. It's probably wisest to only compost haulms that are disease free and, unless you want errant spuds in the pile, remove all those little tubers if it bothers you. You will want to run fairly hot compost that will render any potential disease inert, but that is the case with most everything.

Otherwise, it seems that there may be some modicum of risk when adding potato haulms to the compost bin but it seems to be minimal. If you are concerned about putting potato haulms in your bin, then “when in doubt, throw it out.” As for myself, I will continue to compost almost any organic matter but will err on the side of caution and dispose of any diseased plants.

Composting Fish Waste: Tips On How To Compost Fish Scraps

Using Seaweed For Compost: Learn How To Compost Seaweed

What Is Activated Charcoal: Can Charcoal Be Composted For Odor Control

Composting Fish Waste: Tips On How To Compost Fish Scraps

Using Seaweed For Compost: Learn How To Compost Seaweed

What Is Activated Charcoal: Can Charcoal Be Composted For Odor Control