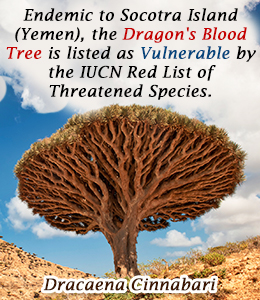 Dragon's blood, which refers to the bright red resin or sap obtained from the dragon's blood tree, was used for making varnish by the 18th century Italian violin makers.Dragon's blood tree, which is the common name of Dracaena cinnabari, is an evergreen tree. It is endemic to the Socotra archipelago, which includes four islands in the Indian Ocean. It grows in the harsh, arid climate of the Socotra Island, which is the largest of the four islands of the Socotra archipelago. It is a part of the Republic of Yemen. It is very rich in flora and fauna, with around 700 species that are native to this island only. The island was recognized by the United Nations Educational, Scientific and Cultural Organization (UNESCO) as a world natural heritage site in July 2008.Dracaena cinnabari tree is one of the most distinctive plants of this region. It can be found at the elevations of 300-1500 m. It gets its unusual common name from the red-colored sap or resin that exudes from the fissures in the bark or the branches of the tree. This resin has been used for various purposes for centuries. The following sections provide a few interesting facts about the dragon's blood tree.About Dragon's Blood Tree✦ Plant type: Evergreen
✦ Genus: Dracaena
✦ Family: Asparagaceae
✦ Order: Asparagales
✦ Scientific Name: Dracaena Cinnabari
✦ Also called: Socotra dragon tree
✦ Native to: Socotra Island, Republic of Yemen
✦ USDA Hardiness Zone: 10 to 11
✦ Height: Up to 10 m
✦ Growth Rate: Slow
✦ Light Requirement: Full sun
✦ Watering Needs: Drought-tolerant
✦ Preferred Soil Type: Limestone-based soil 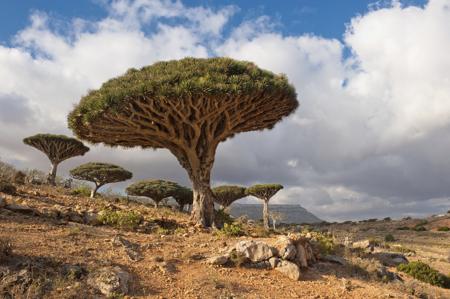 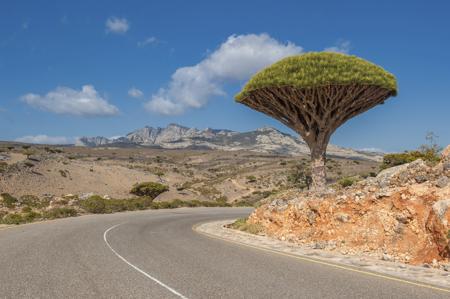 Dragon's Blood Tree at Dixam PlateauInteresting Facts about the Dragon's Blood TreeThere has been some confusion regarding the taxonomic classification of this genus, with the species being classified under three families called Agavaceae, Liliaceae, and Dracaenaceae. The species of this genus have survived in margins of the Tethys tropical forest since the Tertiary period. This tree has adapted well to its environment. Here are a few facts about this tree.✦ Dragon's blood, the resin extracted from the trunk of the Dracaena cinnabari, was known to the ancient Romans. It finds mention in a 1st century Periplus.

✦ Dracaena cinnabari was first described by Lieutenant Wellsted of the East India Company in 1830s, but it was a Scottish botanist named Isaac Bayley Balfour who described the species and gave it its scientific name in 1880.

✦ The density of this plant is not homogeneous. The trees can be found in the central plateau of Dixam, the central granite massive of Haggeher, and the eastern area of Hamadero, Sirahon and Kilisan.

✦ Dracaena cinnabari is the only plant in the Dracaena genus to form dense woodlands.

✦ This tree should not be mistaken for Dracaena draco, another species from the genus that is also called dragon's blood tree. This species is native to Canary Islands, Madeira, Morocco, and Cape Verde Island.

✦ Dracaena cinnabari trees are mostly found on limestone plateaus on the Socotra Island.

✦ In its native habitat, this tree can live for hundreds of years. However, its population is getting affected due to fragmentation of its habitat by human activities. 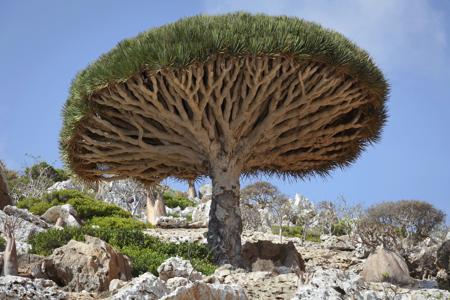 Dense Canopy✦ It is the densely-packed crown of the tree that gives it an interesting shape. The foliage is found towards the apex or the distal part of the stems. 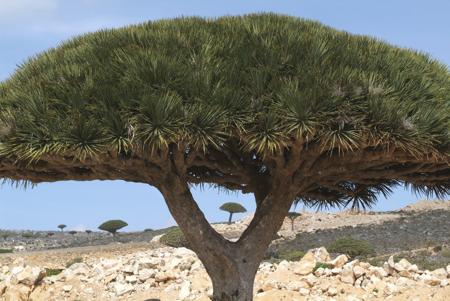 Shade Provided by the Crown✦ This tree has adapted well to the harsh environment. Its upturned, mushroom-like crown provides shade to the roots, and reduces evaporation of water. Its waxy leaves absorb water from the air, and water is then transported from the leaves to the branches, stems, and roots. 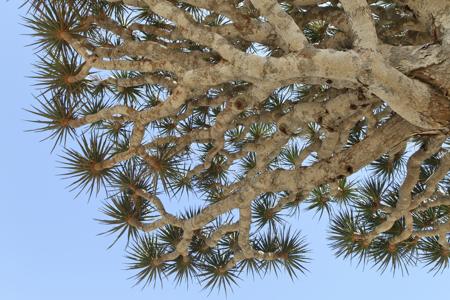 Leaves of the Dracaena cinnabari Tree✦ The trees often grow together. Their umbrella-shaped crown or canopy also blocks the harsh rays of the sun, thereby protecting the seedlings that grow under the trees.

✦ The trees grow well in regions that experience mist and low clouds, as the leaves can then trap moisture from the air, and channel it towards the roots.

✦ The shape of the tree could be attributed to dichotomous branching, wherein each of the branch divides into two sections. The trunk divides after the tree flowers, which is why botanists can calculate the approximate age of the tree by counting the number of divisions.✦ The trees often grow together. Their umbrella-shaped crown or canopy also blocks the harsh rays of the sun, thereby protecting the seedlings that grow under the trees.

✦ The trees grow well in regions that experience mist and low clouds, as the leaves can then trap moisture from the air, and channel it towards the roots.

✦ The shape of the tree could be attributed to dichotomous branching, wherein each of the branch divides into two sections. The trunk divides after the tree flowers, which is why botanists can calculate the approximate age of the tree by counting the number of divisions. 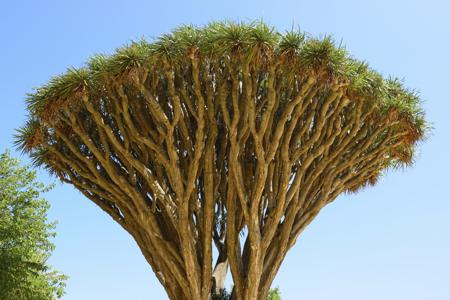 Branches of Dracaena cinnabari✦ The leaves of the tree are quite stiff, and are found at the end of young branches. They can grow up to 60 cm in length and 3 cm in width. 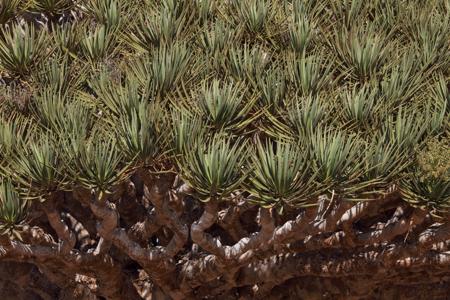 Spiky Leaves of the Tree✦ Small, fragrant, greenish-white flowers appear at the ends of the branches in the month of February. Within five months, the tree produces berries.

✦ Though Dracaena cinnabari is a monocot, it displays secondary thickening of the roots and stems.

✦ Referred to as emzoloh by the natives, the red-colored resin is believed to possess therapeutic properties.

✦ The natives of Socotra Island still use the resin for a wide range of reasons. It is commonly used for facilitate healing of wounds. It is also used as a blood-thinner and an antipyretic. It is also used for treating external ulcers, diarrhea, and dysentery in Yemeni folk medicine.

✦ The resin is a good source of alkaloids and procyanidins.

✦ The resin is also believed to possess astringent properties, which is why it was used as a muscle relaxant.

✦ It is believed that the wound-healing properties of the resin could be due to the presence of proanthocyanidins and taspine.

✦ Considered to be one of the oldest forest community on the earth, the number of young saplings is on a decline in the Dracaena woodlands.

✦ This tree falls under the category of umbrella species, as providing protection to this tree will help protect many other species that make up the habitat.

✦ It is believed that this tree might lose about 45% of its potential habitat by 2080.

✦ The signs of regeneration have been observed in regions that are not accessible to livestock. The use of leaflets for feeding goats during drought could be a contributing factor for its decline. 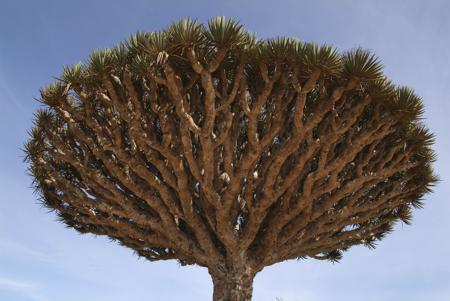 Dense Crown of the Tree✦ In some places, the younger trees are producing tall trunks rather than branching out to form the umbrella-shaped canopy.

✦ According to the natives, the trees are more likely to thrive in areas where the terrain comprises solid rock pavement with several cracks. As the water seeps down the cracks after rain, it allows the roots to get moisture and nourishment.

✦ The species is vulnerable due to extraction of the resin, goat grazing, and the use of wood for making traditional beehives. Drying up of the archipelago is believed to be another contributing factor for the decline of the woodland.In 1998, the dragon's blood tree was classified as endangered in the IUCN Red List of Threatened Species. It is currently classified as vulnerable. Efforts are being made to protect the tree. In fact, it was listed along with the other species of the Dracaena genus in the Appendix II of the Convention on International Trade In Endangered Species of Wild Fauna and Flora (CITES) in 2010. Efforts are being made to conserve globally important biodiversity of the Socotra Archipelago. Limiting the grazing by livestock and restricting the construction of roads in its natural habitat can also go a long way in protecting this species of Dracaena genus.

How To Care For Ming Aralia Houseplants

How To Care For Ming Aralia Houseplants