How to Make a Worm Farm

2016/8/9 9:26:44
Making a worm farm is the best way of converting organic and kitchen waste to useful compost, which has a number of advantages. Read on to know how to make a worm farm... 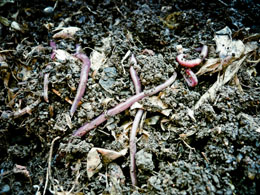 Vermiculture means cultivating worms in containers called worm farms. Building a worm farm is quite an easy job and there are few simple steps and instructions you need to follow. The equipment required for making a worm farm are given below: Steps to Make a Worm Farm:

Getting Started
Arrange for containers, wooden or plastic, according to the size of farm that you will like to build. The size of the containers should be large enough so that the worms can easily eat the garbage. The color of the bins should be dark because worms do not compulsorily require light for their metabolism. Figure out the amount of the garbage you want to convert into useful compost. Approximately, for every pound of the compost, you will require a square foot of space in your worm farm.

Preparing the Bedding
For bedding material you can use newspapers, dried leaves or cardboard. The newspapers should be soaked in water before adding them to the containers. Place the soaked newspapers and some soil at the bottom of the first container. Repeat the same for the remaining containers.

Adding the Worms
Now, add the worms to the containers. The number of worms to be added depends on the amount of the garbage you want to compost. Worms multiply, so add the number of worms accordingly. Use red worms or tiger worms in your farm. Do not use earthworms, as they are not useful for worm composting.

Adding the Garbage
Once you have added the worms, it's time to add food for the worms. Initially, do not add large quantities of garbage in the containers. Add small quantities of food in the beginning and check out the time taken by the worms to decompose the garbage. This will help you get an idea about how much garbage should be added. There is a variety of garbage that can be used for the farm. This includes vegetable scrap, kitchen waste, leftover food like bread and pasta. Do not add a lot of acidic garbage like fruits, tea or waste coffee powder. Do not add poultry, meat and dairy products as these create bad odor.

Your worm farm is now almost ready. Now, cover the containers with newspapers and nest the containers one above the other. Place the lid of the container at the top. Keep it in a place that is cool and has shade. Ensure that the worm farm is wet and you add water when it goes dries. While placing the compost, always place it in a new place other than previous so that it is easy for you to collect the useful compost prepared by the worms.

Making Compost Indoors – How To Compost In The Home

Why Are Vegetables Popping Up In Compost Pile?

How to Make a Compost Pile

Winter Composting: How To Keep Compost Over Winter

What Is Ericaceous Compost: Information And Plants For Acidic Compost

Making Compost Indoors – How To Compost In The Home

Why Are Vegetables Popping Up In Compost Pile?

How to Make a Compost Pile

Winter Composting: How To Keep Compost Over Winter

What Is Ericaceous Compost: Information And Plants For Acidic Compost