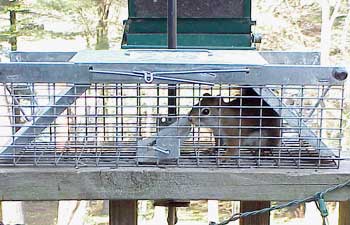 Set traps near a food source. For example, a birdfeeder or along a runaway, such as at the base of a tree.

If you've tried repelling, excluding, and scaring away a pest animal and it's still causing problems, you can trap and release it, or use a lethal trap. Trapping is an effective way to remove a specific pest animal, but isn't useful against a large local population over the long run. In the latter case, trapping should be done in conjunction with exclusion, fencing, or altering the habitat.

It's best to call your local wildlife officer or professional pest removal company to handle problem animals. However, if you're willing to do the dirty work yourself, here are some tips to follow.

Live trapping and releasing animals has become popular. It seems no one really wants to hurt those fuzzy, furry, cuddly creatures. But in some cases live trapping can be more cruel than killing the animal. Relocated animals often become disoriented and aren't able to fit into their new habitats, often starving to death. If you use live traps, contact the Humane Society or the local or state game officer to determine the best method, time to trap, and way to release a wild or nuisance animal before setting the trap. Some species are protected from trapping by law in various states.

Once you've caught the animal, be careful. Wild animals can carry diseases, such as rabies. Frightened skunks will be more likely to spray; an agitated woodchuck will nip in self-defense. Here are some tips for trapping specific animals.

Chipmunk & Squirrel
Bait the trap with nuts, peanut butter, rolled oats or seeds. Set traps near a food source (e.g. a bird feeder) or along a runaway such as at the base of a tree. Use metal traps, as rodents have sharp teeth and can chew through wooden traps. Check traps a few times a day. More information on chipmunks and squirrels .


Gopher and Mole
Lethal traps are more commonly used on gophers and moles than live traps. Trap in spring and fall when these critters are most active. No bait is needed; just place the trap in a main tunnel and disguise it well. Wear gloves so you don't contaminate the trap with your scent, and cover the tunnel with soil. Move traps within two to three days if you haven't caught anything.


Raccoon and Opossum
Bait with sardines, marshmallows, cat food, or corn. Place the bait in the back of the trap so it closes properly. This will prevent these chubby varmints from backing out of the trap after eating. Place the trap near a food source, (e.g. your ripening corn patch) and keep it strongly anchored. Use caution when you release the animal. More on raccoons and opossums.

Skunk
Skunks are attracted by fishy smells, so bait their traps with sardines, fish scraps, or seafood flavored cat food. Cover the trap with a tarp, since skunks like to explore dark areas. If you're using a live trap, the cover will also protect you if they spray. If you're unfortunate enough to get sprayed, wash yourself and clothes with tomato juice, vinegar, hydrogen peroxide, or deodorizer made from orange-peel extract to remove the odor.


Woodchuck
Beans, lettuce, carrots, and apples are some favorite woodchuck foods. Place the trap near their burrow entrance when you first sight them. Trap only in summer. Spring trapping may orphan a burrow full of young, and in the fall as they are readying to hibernate.

How To Get Rid Of Sooty Mold

How Can I Get Rid of Wiregrass?

How Can I Eliminate Thistle?

How To Get Rid Of Sooty Mold

How Can I Get Rid of Wiregrass?

How Can I Eliminate Thistle?