2016/8/9 9:26:40
Having a rotating compost bin in your garden has numerous benefits. Read the following article and learn how to build one to enjoy its advantages. 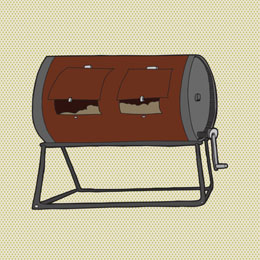 Considered one of the ancient methods to prepare fertilizers, composting is a biological method, wherein microorganisms decompose organic material to form compost. This process is completely natural, though human beings can surely help to quicken it. One such way is to build rotating bins.

Such a bin can be easily made and paced in your garden, where you can constantly prepare natural fertilizers. When the bin rotates, it ensures that all contents are properly mixed up inside, thereby facilitating easy decomposition of the organic waste. It also maintains a higher temperature inside for preparing compost fast. Ideally, it should take you about three weeks to prepare it. Following are some instructions on building one, and preparing natural fertilizers at will, for plants in your garden:

Building a rotating compost bin involves two major procedures: making the framework, and fixing the bin on it. Let's start with the framework first.Thus, building it is very easy, and it has great potential benefits. You can prepare quick manure of excellent quality all the time, at virtually no cost, thereby ensuring your plants get necessary nourishment and grow well.

Composting How To: Tips On Starting A Compost Pile At Home

How to Make a Worm Composting Bin at Home

Composting How To: Tips On Starting A Compost Pile At Home

How to Make a Worm Composting Bin at Home